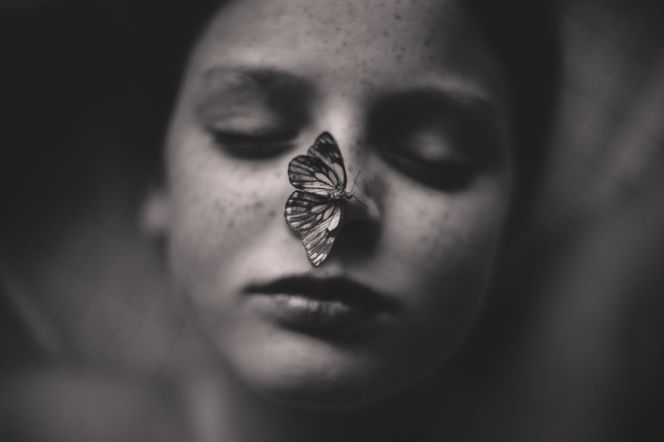 a desolated girl in the wee hours

of the midnight devoid of any sound

in the pitch black of her home’s backyard,

with the hazy feel of dull and passive moods

restrained in the inner sense to a unusual disturbia,

glooming her minds veiled and

in loner lassitude she gets down drowsy,

down to a solo black melancholy,

while everything else in the continuum

around is dark and dread,

in this eerie aftermath leaving her stranded.

Perhaps she is affected by this solo sickness,

immersing her deep onto this gruelling

foggy midst of aches and stings,

realizing the pangs of the mating flame,

as if she is set in a slow ablaze

in this cold night of her black malady,

alongside her bleakly woes of a surreal sextain.

Its a sestina of her aches and agony,

sans her panacea, sans her antidote,

Its the lyric of her yearn

alongside that inner creeping in sour,

of pangs and yearn while sensing the venom of time,

lacking the artist of her soul’s painting,

lacking the poet of her soul song,

even its very sound, its every last unseen wave.

She is all alone and bitten by this slither,

the serpent that seduces you

with this malaise of black malady,

that manoeuvres your insides

with a deviant harshness

while creeping  underneath your skin

as you are slowly flapping

with inner thirst in search

of your quenching liquor,

The freckles in her skin

reminds us of the touch,

while the spots and acne in her face

reminds us of the brace,

the lack of moisture in her parched lips

suggests us her other twine’s absence

has seriously taken her down and dull,

Her inner flapping is quite intense

though in a milder pace,

as she closes her eyes feeling her roving scintillas

all burned down to ashes and grey.

her instigated pecks of ethereal longing

have descended in vain,

those tiny specks of lewd lustre and serene patina,

the irradiating entities of wild arousal

and indistinct call, are seemingly obfuscated

denying their traverse in a void swallow,

to refute its lewd calling,

while she is still flapping amongst

the unseen flaps of the black melancholy,

the flaps of the solo aches,

yearning for that palpable bind

which seem to elude her and delude her,

the flaps of this eerie malady

as in a slow enigmatic glide,

reverting her only the futile taste of sour,

as time adorns this surreal attire inside the dark paradise,

amidst the flaps of aching and longing,

the slow undulating flaps of this surreal sextain,

as she is still flapping scared and insecure,

she ensues all alone sans her thirst’s satiating potion,

indeed in search of her sole irradiance,

she is still flapping …

She is all weary and drowsy,

lacking her usual wings of hover,

lacking her sheen and fulgere,

in a hazy bizarre she is moving along,

in this dark paradise of dull, dread and drab,

inside this pitch black continuum of blight,

in weedy dizzy she is confused

as if on a enigmatic maze and in futile yearn,

unsinging her song of blithe

she seems to be in a dilemma,

befuddled by the murky time’s

sans her sleep in a vague insomniac muse

of the wee hour libidos,

as in a quest less maze of a butterfly’s path,

such a light trace of curves and arcs,

as she is flapping her wings to fly,

before she quaintly drops by,

to a muse solo and dull,

so deep and lull,

of this sextain lady’s solo melancholy

of a befuddled black butterfly.

an iota of sapien in the myriad matrix of infinite galaxies .. View all posts by prasad hirsch